I am almost shocked at myself...but here goes, I am sure that all of you are expecting a wedding post and actually I was expecting my next one to be a wedding post also - however, I just read a story on ESPN about a football team (yes, football, Joel will be so proud of me!) that brought me to tears. So please take a moment and read this awesome story!!

There are some games when cheering for the other side feels better than winning. 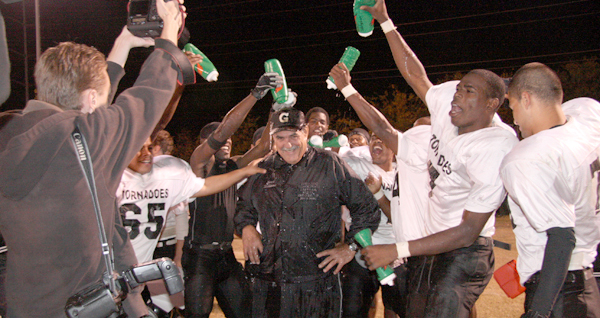 They played the oddest game in high school football history last month down in Grapevine, Texas.

It was Grapevine Faith vs. Gainesville State School and everything about it was upside down. For instance, when Gainesville came out to take the field, the Faith fans made a 40-yard spirit line for them to run through.

Did you hear that? The other team's fans?

They even made a banner for players to crash through at the end. It said, "Go Tornadoes!" Which is also weird, because Faith is the Lions.

"I WOULDN'T EXPECT ANOTHER PARENT TO TELL SOMEBODY TO HIT THEIR KIDS. BUT THEY WANTED US TO!"

"I never in my life thought I'd hear people cheering for us to hit their kids," recalls Gainesville's QB and middle linebacker, Isaiah. "I wouldn't expect another parent to tell somebody to hit their kids. But they wanted us to!"

And even though Faith walloped them 33-14, the Gainesville kids were so happy that after the game they gave head coach Mark Williams a sideline squirt-bottle shower like he'd just won state. Gotta be the first Gatorade bath in history for an 0-9 coach.

But then you saw the 12 uniformed officers escorting the 14 Gainesville players off the field and two and two started to make four. They lined the players up in groups of five—handcuffs ready in their back pockets—and marched them to the team bus. That's because Gainesville is a maximum-security correctional facility 75 miles north of Dallas. Every game it plays is on the road.

This all started when Faith's head coach, Kris Hogan, wanted to do something kind for the Gainesville team. Faith had never played Gainesville, but he already knew the score. After all, Faith was 7-2 going into the game, Gainesville 0-8 with 2 TDs all year. Faith has 70 kids, 11 coaches, the latest equipment and involved parents. Gainesville has a lot of kids with convictions for drugs, assault and robbery—many of whose families had disowned them—wearing seven-year-old shoulder pads and ancient helmets.

So Hogan had this idea. What if half of our fans—for one night only—cheered for the other team? He sent out an email asking the Faithful to do just that. "Here's the message I want you to send:" Hogan wrote. "You are just as valuable as any other person on planet Earth."

Some people were naturally confused. One Faith player walked into Hogan's office and asked, "Coach, why are we doing this?"

And Hogan said, "Imagine if you didn't have a home life. Imagine if everybody had pretty much given up on you. Now imagine what it would mean for hundreds of people to suddenly believe in you."

Next thing you know, the Gainesville Tornadoes were turning around on their bench to see something they never had before. Hundreds of fans. And actual cheerleaders!

"I thought maybe they were confused," said Alex, a Gainesville lineman (only first names are released by the prison). "They started yelling 'DEE-fense!' when their team had the ball. I said, 'What? Why they cheerin' for us?'"

It was a strange experience for boys who most people cross the street to avoid. "We can tell people are a little afraid of us when we come to the games," says Gerald, a lineman who will wind up doing more than three years. "You can see it in their eyes. They're lookin' at us like we're criminals. But these people, they were yellin' for us! By our names!"

Maybe it figures that Gainesville played better than it had all season, scoring the game's last two touchdowns. Of course, this might be because Hogan put his third-string nose guard at safety and his third-string cornerback at defensive end. Still.

After the game, both teams gathered in the middle of the field to pray and that's when Isaiah surprised everybody by asking to lead. "We had no idea what the kid was going to say," remembers Coach Hogan. But Isaiah said this: "Lord, I don't know how this happened, so I don't know how to say thank You, but I never would've known there was so many people in the world that cared about us."

And it was a good thing everybody's heads were bowed because they might've seen Hogan wiping away tears.

As the Tornadoes walked back to their bus under guard, they each were handed a bag for the ride home—a burger, some fries, a soda, some candy, a Bible and an encouraging letter from a Faith player.

The Gainesville coach saw Hogan, grabbed him hard by the shoulders and said, "You'll never know what your people did for these kids tonight. You'll never, ever know."

And as the bus pulled away, all the Gainesville players crammed to one side and pressed their hands to the window, staring at these people they'd never met before, watching their waves and smiles disappearing into the night.

Anyway, with the economy six feet under and Christmas running on about three and a half reindeer, it's nice to know that one of the best presents you can give is still absolutely free.

Posted by janalynn at 9:34 AM 3 comments: Links to this post

The Highlights of Ninevah

So as the wedding is getting closer, God is continuing to work in my heart on the wonders of Ninevah... first... today on my way home from Ninevah I stopped for gas and it was only 1.82 a gallon - that is definately a plus since I will be doing a lot of commuting during my first several months of becoming a Ninevite.

Another wonder of Ninevah is the people - there are some very nice and welcoming people in the community, they even like my dog! Which is a plus! The workers at the Mennonite Church of Ninevah are also very welcoming to me and my dog - the secretary even has treats for Tucker upon arrival - if only they had treats for me as well...maybe next time.

The Ninevah Mall - to some known as the Village Merchants, to others known as the Richfield Walmart...they have great service there - the cashier was so nice she even volunteered to do some wedding favors. They have clothes, groceries, furniture, decorations, basically everything.

Ninevah has a nice park that is within walking distance so Tucker will enjoy that. I am sure there are many wonders still to come but those are just a few that I have found in recent trips to Ninevah.

There is however one new downfall (literally!) to Ninevah....some of the houses there are made for people with really small feet and have really steep stairs that are easy for people with big feet to fall down on...I know from experience, with a small bruise on my hand to show for it.

Oh Ninevah - you will one day win my heart I am sure, just as the man from Ninevah has done already!
Posted by janalynn at 1:43 PM 1 comment: Links to this post 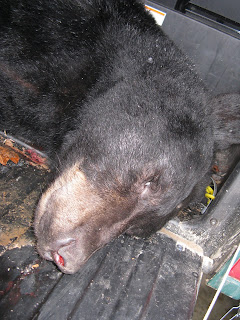 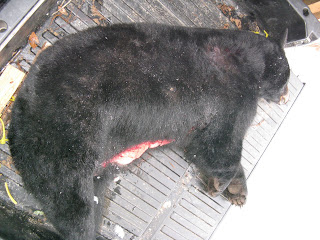 My little brother the mighty hunter made the Grant Family proud with the first ever Bear! It was so crazy to go home for thanksgiving and walk out to the garage to see this huge bear laying in the back of my dad's ranger. The funny part about the whole thing is that the bear had been trapped and moved out of our township one year earlier and was taken over 50 miles away, but as creatures of habit, she made her way all the way back to our property, just to meet my brother. She was aged at about 12 years old and dressed out (that means her weight after being gutted, sorry to be gross) at 209 pounds. I am guessing that my wedding present is going to be bear meat!
Posted by janalynn at 1:34 PM 1 comment: Links to this post

And the winner is...

Okay for all those that picked 108 - you are the winners of the RSVP contest....and I must say that I have never had so many people second guess themselves about RSVPing and the funny part is that all those that were unsure were some of the first ones to reply - so great job to all my friends who were quick replyers it makes my job easier!

So it is now less than two weeks from the wedding and I still have lots to do - actually I don't have a ton to do - It just feels like it and since the wedding is so big there are some added legistics that make me feel less organized, however I did get quite a few things checked off the list yesterday thanks to the help of Jeanne and Joel - you guys are the best!!!

It is now almost 6am and I am up and ready for the day, I think I am going to do a walmart run before it gets crazy, get all the stuff that I need for breakfast tomorrow and then get some much needed office work done. That is the plan we will see how it goes...oh and take lots of meds today since my body is not happy with the recent treatment - hence being up since 4am.
Posted by janalynn at 5:50 AM 1 comment: Links to this post